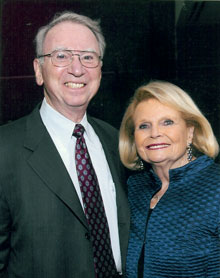 Editor's Note: Photos of the Jacobs' and of the School of Engineering available upon request.

"We are very proud of UCSD and the School of Engineering's impressive accomplishments in its brief history," said Dr. Jacobs, CEO and Chairman of QUALCOMM Incorporated (San Diego). "The economic well-being of the entire region depends very strongly on the success of UCSD and its ability to perform forefront research and attract and retain excellent students. We currently face a shortage of engineers, particularly in California, but also throughout the United States and even worldwide. We feel it is important to support engineering at this crucial time."

"We are deeply committed to affordable and high quality education that is available to everyone," said Mrs. Jacobs. "All four of our children chose to go to UC schools because of the caliber of education available here. But today, state and federal funding is insufficient to sustain UC's standard of excellence in teaching and research. We, as a community, must become energized to support the precious resource that is the UC system."

Dr. Jacobs was a founding member of the UCSD faculty, and helped build programs in electrical and computer engineering. In 1981, he and Mrs. Jacobs established the Irwin Mark and Joan Klein Jacobs Chair in Information and Computer Science, which was the first endowed chair at UCSD, and one of the earliest examples of private philanthropy to the young, state-supported university.

The Jacobs School of Engineering is the first school to be named at UCSD. Income from the Jacobs' gift will be used for a variety of purposes including: student fellowships and scholarships; pilot research start-ups; facilities and equipment; faculty recruitment; curricula development; and other initiatives.

"We are grateful to Joan and Irwin for their commitment to the University," said UCSD Chancellor Robert Dynes. "In less than 30 years, the School of Engineering at UCSD has achieved an extraordinary level of excellence. Joan and Irwin's gift is the catalyst we need to continue to build one of the great engineering schools in the country. We are pleased to name the school in their honor, as a tribute to their profound influence on engineering and the future of our community."

The Jacobs School of Engineering was ranked ninth in the country in the most recent National Academy of Sciences/National Research Council survey of graduate programs. The School was also ranked among the top 25 in the 1997 U.S. News & World Report Survey of graduate engineering schools. Several national research centers are affiliated with The Jacobs School of Engineering including the Center for Wireless Communications, the San Diego Supercomputer Center, the Center for Magnetic Recording Research, the Powell Structural Research Laboratories, and the Institute for Biomedical Engineering.

"From the founding of UCSD, Irwin and Joan Jacobs have contributed tremendously to the success of the University," said UC President Richard Atkinson. "Today, their splendid gift represents a great opportunity to grow and enhance our engineering programs to meet the emerging demands of California's high technology industries."

"This is a truly transforming event in the history of the School, and we thank Joan and Irwin for their vision and generosity," said Engineering Dean Robert Conn. "We have set very ambitious goals for The Jacobs School of Engineering, and we feel a sense of urgency. Today's healthy economy needs the products of the school--a highly skilled workforce and scientific discoveries-to sustain and fuel economic growth."

Conn became dean of the School of Engineering in 1994, and even before his arrival, he worked to forge strong relationships with San Diego industry. Together with Irwin Jacobs and other business leaders, he helped establish the Center for Wireless Communications, a research and education program that serves as a model for industry-University collaboration. They also worked together to lay out a comprehensive strategic plan for the School that would be responsive to the needs of the university and the community.

Over the past four years, approximately 30 new faculty have joined the School, and at least 25 more faculty will be recruited within the next three years. Growth in faculty will allow the school to educate more students, both at the undergraduate and graduate levels.

"We need the commitment of community leaders like Joan and Irwin Jacobs to achieve our goals," said Conn. "During the next three years, we must identify private resources to construct a third engineering building to accommodate growth, fund endowed student fellowships and professorships that will help us recruit the very best people to San Diego, and add to the School's endowment in order to preserve the excellence of the School."

Dr. and Mrs. Jacobs have been long-time supporters of UCSD. Mrs. Jacobs serves on the Board of Overseers and the board of the La Jolla Playhouse. She is the co-founder and a past president of the Friends of the International Center. Dr. Jacobs is a member of the Council of Advisors to the School of Engineering and trustee of the UC San Diego Foundation. He also serves on the UC President's Engineering Advisory Council. QUALCOMM Incorporated is a member of the Corporate Affiliates Program of the School of Engineering and is a founding member of the School's Center for Wireless Communications.