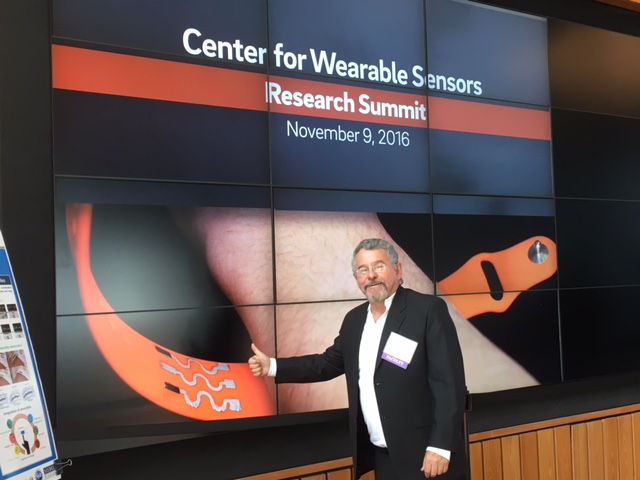 “The summit was a great opportunity for us to discuss and chart the future of wearable sensors with the forward-looking faculty we have as well as industry who know the field,” said Center co-director and electrical and computer engineering professor Patrick Mercier. Research in the Center features interdisciplinary collaborations to produce innovative technologies in the field of wearable sensors. For example, Center co-director and nanoengineering professor Joseph Wang’s lab have worked with electrical engineers in Mercier’s lab to develop a mouth guard sensor and an alcohol sensor.

Faculty talks at the summit highlighted some future directions for the Center.

“For wearable devices to be more practical and appealing to the general population, they need to be able to seamlessly integrate into daily life such that the users are unaware that they’re wearing their wearables,” said Mercier.

Mercier calls these “unawearables.” The idea:  if  ultra-low-power sensors can acquire useful data and  be integrated into things that people already wear in daily life, like socks, underwear, glasses, t-shirts, hats, users won’t have to do anything.

Nanoengineering professor Darren Lipomi spoke about how his lab is developing what he calls “molecularly stretchable” electronics; the molecules themselves are the ones accommodating the strain, and the materials can conform to the shapes of the human body. Examples include epidermal solar cells and low-cost, lightweight sensors attached to a glove that recognize the gesture the hand is forming – such as a fist or letters of the American Sign Language alphabet.

During the afternoon session, UC San Diego exercise physiologist David Wing gave an intro to the Exercise Physical Activity Research Center (EPARC), which he directs. The center offers researchers, from UC San Diego and elsewhere, state-of-the-science services, tools, and resources to conduct physical activity and exercise-related research. The Center for Wearable Sensors conducts many of its tests at this facility.

Computer engineering and electrical engineering professor Tzyy-Ping Jung spoke about wearable sensors that can measure the effects of stress on human performance such as driving and working.

“Most research on stress focuses on laboratory- or task-induced stress,” said Tzyy-Ping. “Real-life stress is very difficult to study because you need to be able to measure the data.”

Tzyy-Ping and his colleagues are working on a system that objectively measures sleep quality and estimates fatigue and stress.

When asked about the biggest challenge facing wearable devices today, the panelists chuckled.

The session concluded with the question, “What is your favorite wearable device and how would you improve it?” Mercier answered on behalf of the panel, saying, “No one has a favorite wearable sensor because none of them do what we want them to do yet. That’s why we’re all here.”

UC San Diego engineering students doing research on wearable sensors had the opportunity to present a poster in 90 seconds – something called an ‘elevator pitch’ – to summit attendees and industry-member judges.

The winners of the poster pitch session were Jayoung Kim, who presented the tattoo-based alcohol monitoring system developed in professor Joseph Wang and Patrick Mercier’s labs, and Somayeh Imani, who presented her poster on hybrid biosensor for real-time, noninvasive health and fitness monitoring. For example, she says, if you want to monitor the lactate level in your blood, which is a biomarker for physical effort/how much work an athlete is doing, the method is typically invasive (involves a finger prick to collect blood). She and her colleagues have come up with a skin-worn wearable system that noninvasively measures the wearer’s physical activity and biochemistry at the same time. It simultaneously measures heart rate and lactate levels. Read more

The following posters were also presented:

Zhenlong Huang presented his poster on a stretchable, flexible drug delivery system that consists of sensors to monitor a wound, a system to analyze sensor data and deliver drugs automatically and antennas that can send health data to a smartphone.

Timothy O’Conner, winner of the poster presentation at last year’s Research Expo, presented on the sensors attached to a glove mentioned above. The sensors translate these signals into digital signals in real time and have applications in virtual reality and telesurgery.

Hui Wang spoke about a low-power timer/oscillator for wireless sensors used in applications such as long-term health monitoring. The oscillator was integrated on a chip and shown to consume only 51 picowatts of power during operation.

Siddharth Siddharth presented an emotion-tracking platform called EmotoSense. It has applications in gaming and the entertainment industry. For example, the environment around your character in a computer or video game could change depending on your mood.

Michael Ostertag presented a wearable air-quality monitoring system for personalized health. Air quality has been shown to correlate with hospital visits for children with upper respiratory disease. The system helps to predict health risks before entering a region.

Zhengui Wu is developing infrared photo detectors, which have many applications including biomedical sensing. “Commercial photodetectors suffer from high temperature sensitivity, while this photodetector does not,” said Wu. “It can be used to accurately detect someone’s heart rate.”