The device is screen-printed, making it cheaper and easier to manufacture

Dec. 11, 2020 -- A team of researchers has developed a flexible, rechargeable silver oxide-zinc battery with a five to 10 times greater areal energy density than state of the art. The battery also is easier to manufacture; while most flexible batteries need to be manufactured in sterile conditions, under vacuum, this one can be screen printed in normal lab conditions. The device can be used in flexible, stretchable electronics for wearables as well as soft robotics.

The team, made up of researchers at the University of California San Diego and California-based company ZPower, details their findings in the Dec. 7 issue of the journal Joule.

The areal capacity for this innovative battery is 50 milliamps per square centimeter at room temperature--this is 10-20 times greater than the areal capacity of a typical Lithium ion battery. So for the same surface area, the battery described in Joule can provide 5 to 10 times more power.

“This kind of areal capacity has never been obtained before,” Yinvsaid.  “And our manufacturing method is affordable and scalable.”

The new battery has higher capacity than any of the flexible batteries currently available on the market. That’s because the battery has a much lower impedance--the resistance of an electric circuit or device to alternative current. The lower the impedance, the better the battery performance against high current discharge.

“As the 5G and Internet of Things (IoT) market grows rapidly, this battery that outperforms commercial products in high current wireless devices will likely be a main contender as the next-generation power source for consumer electronics“ said Jonathan Scharf the paper’s co-first author and a Ph.D. candidate in the research group of UC San Diego’s nanoengineering Professor Ying Shirley Meng.

The printed battery cells were recharged for more than 80 cycles, without showing any major signs of capacity loss. The cells also remained functional in spite of repeated bending and twisting.

“Our core focus was to improve both battery performance and the manufacturing process,” said Ying Shirley Meng, director of the UC San Diego Institute for Materials Discovery and Design and one of the paper’s corresponding authors.

To create the battery, the researchers used a proprietary cathode design and chemistry from ZPower.  Wang and his team contributed their expertise in printable, stretchable sensors and stretchable batteries. Meng and her colleagues provided their expertise in advanced characterization for electrochemical energy storage systems and characterized each iteration of the battery prototype until it reached peak performance.

The recipe to better performance 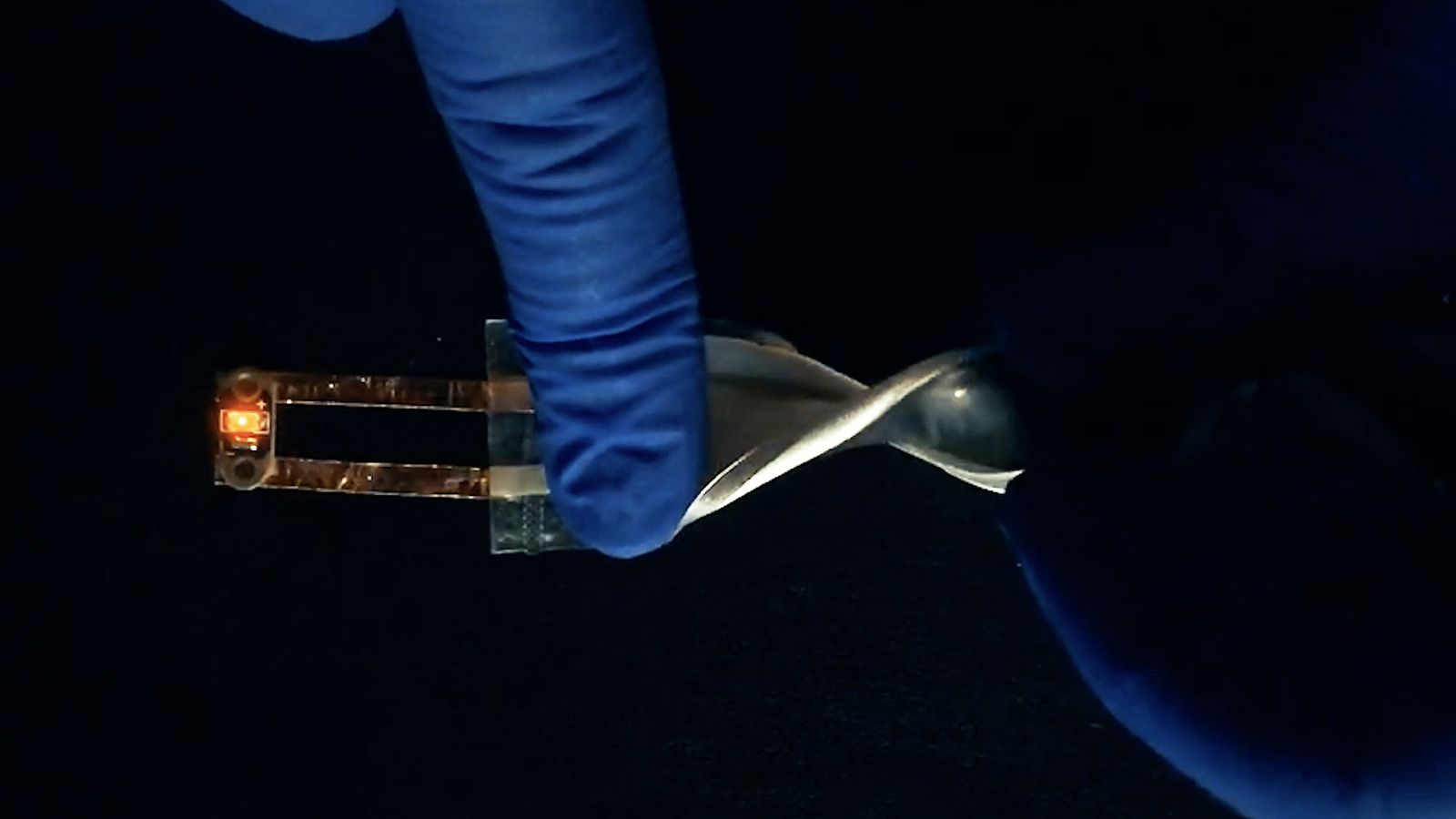 The battery’s exceptional energy density is due to its silver oxide-zinc, (AgO-Zn)chemistry. Most commercial flexible batteries use a Ag2O-Zn chemistry. As a result, they usually have limited cycle life and have low capacity. This limits their use to low-power, disposable electronics.

AgO is traditionally considered unstable. But ZPower’s AgO cathode material relies on a proprietary lead oxide coating to improve AgO’s electrochemical stability and conductivity.

As an added benefit, the AgO-Zn chemistry is responsible for the battery’s low impedance. The battery’s printed current collectors also have excellent conductivity, which also helps achieve lower impedance. 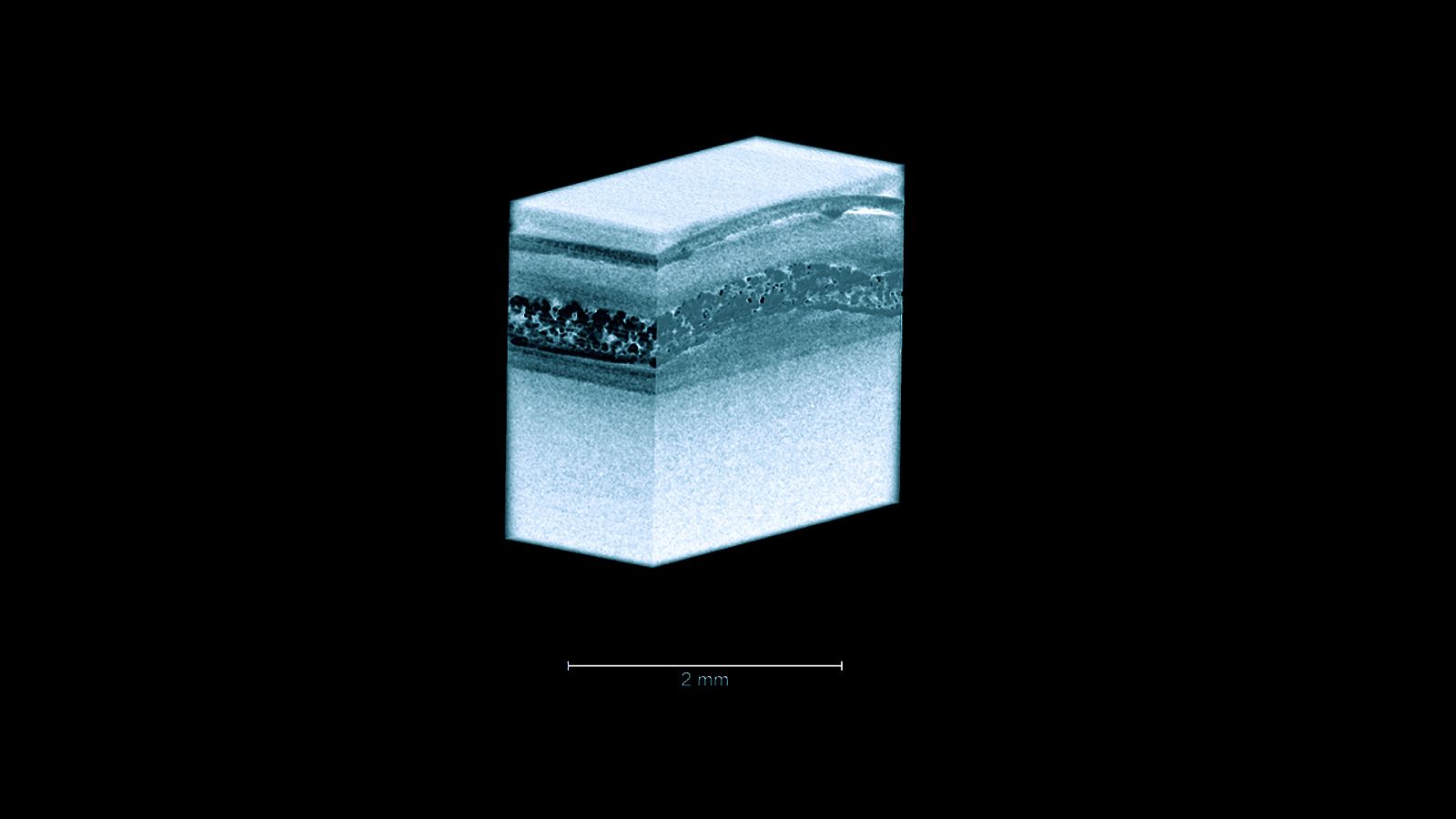 But AgO had never been used in a screen-printed battery before, because it is highly oxidative and chemically degrades quickly. By testing various solvents and binders, researchers in Wang’s lab at UC San Diego were able to find an ink formulation that makes AgO viable for printing . As a result, the battery can be printed in only a few seconds once the inks are prepared. It is dry and ready to use in just minutes. The battery could also be printed in a roll-to-roll process, which would increase the speed and make manufacturing scalable.

The batteries are printed onto a polymer film that is chemically stable, elastic and has a high melting point (about 200 degrees C or 400 degrees Fahrenheit) that can be heat sealed. Current collectors, the zinc anode, the AgO cathode and their corresponding separators each constitute a stacked screen-printed layer.

The team is already at work on the next generation of the battery, aiming for cheaper, faster charging devices with even lower impedance that would be used in 5G devices andsoft robotics that require high power and customizable and flexible form factors.  .