One of the greatest challenges in neuroengineering, whether toward new therapies for neurological diseases or toward new means of human-computer interaction, is to advance our fundamental understanding of how the brain functions to the point where we may effectively interface the human brain with engineered systems that approach its intelligence.

Professor Cauwenberghs pioneered the design and implementation of highly energy efficient, massively parallel microchips that emulate function and structure of adaptive neural circuits in silicon. Embedded mechanisms of synaptic plasticity in these silicon microcircuits model the adaptive intelligence of biological nervous systems interacting with variable and unpredictable environments, and assist in optimizing the energy efficiency and noise robustness of nanoscale circuit components implementing the neural functions. Recently the Cauwenberghs group demonstrated synaptic arrays in silicon for adaptive template-based visual pattern recognition operating at less than a femtojoule of energy per synaptic operation, exceeding the nominal energy efficiency of synaptic transmission in the human brain.

A main focus of current work is on extending integrated sensing and actuation to dynamical interfaces to neural and brain activity. Recent developments include implantable and wireless microelectrode arrays for distributed recording of electrical and chemical neural activity, and biopotential sensor arrays and integrated signal processing for electroencephalogram and electrocorticogram functional brain imaging. These dynamical interfaces between living and artificial nervous systems offer tremendous opportunities for transformative, integrative neuroscience and neuroengineering that are the focus of continued research in the Cauwenberghs laboratory, in collaboration with partners in academia, industry, and the clinical sector.

Gert Cauwenberghs received the M.Eng. degree in applied physics from University of Brussels, Belgium, in 1988, and the M.S. and Ph.D. degrees in electrical engineering from California Institute of Technology, Pasadena, in 1989 and 1994.

He is a Francqui Fellow of the Belgian American Educational Foundation, and received the National Science Foundation Career Award in 1997, Office of Naval Research Young Investigator Award in 1999, and Presidential Early Career Award for Scientists and Engineers (PECASE) in 2000. He was Distinguished Lecturer of the IEEE Circuits and Systems Society in 2003-2004, and chaired its Analog Signal Processing Technical Committee in 2001-2002. He currently serves as Associate Editor for IEEE Transactions on Biomedical Circuits and Systems, and IEEE Transactions on Neural Systems and Rehabilitation Engineering. He is Senior Editor for the IEEE Sensors Journal. 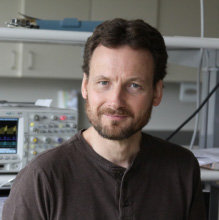